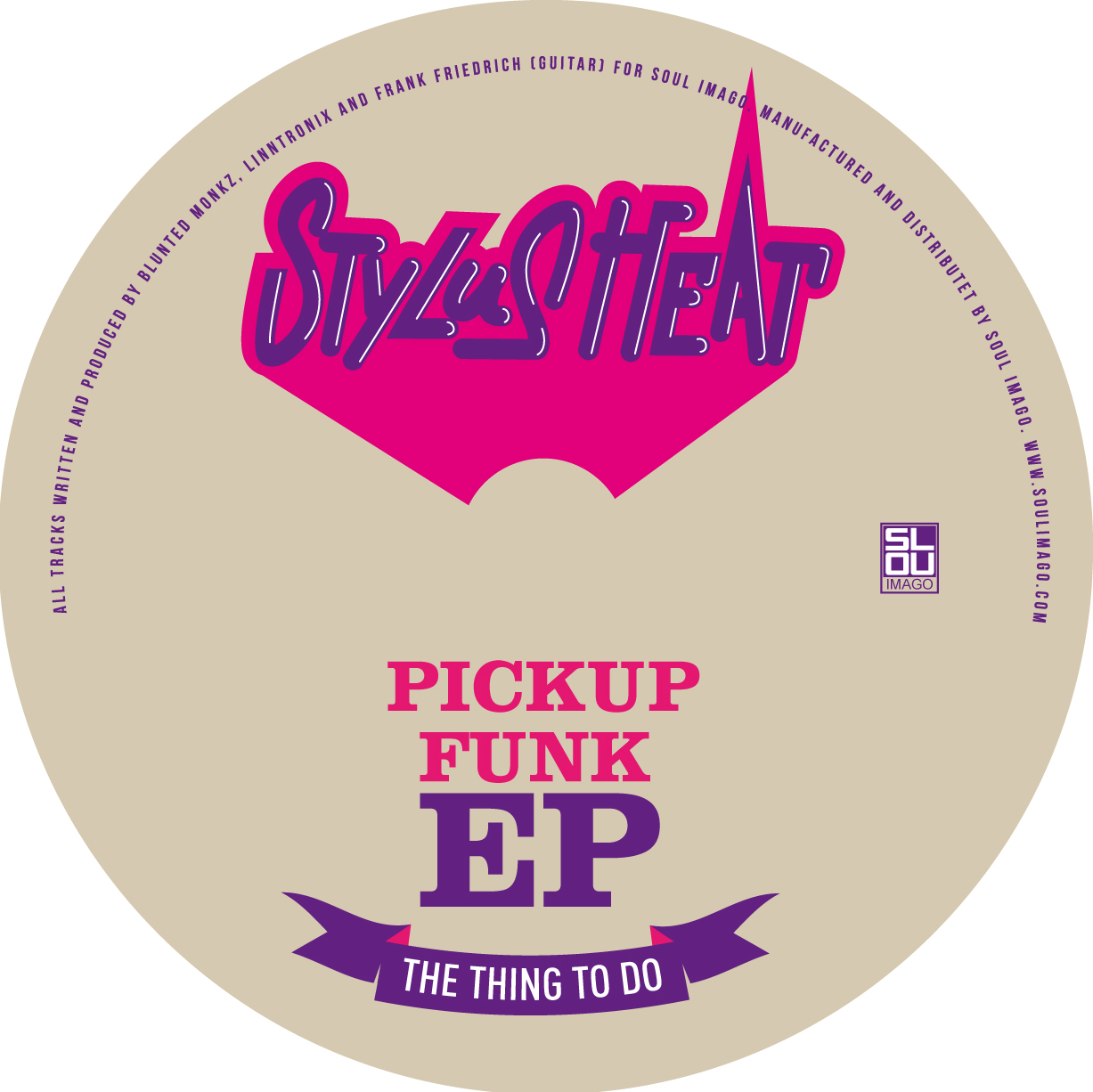 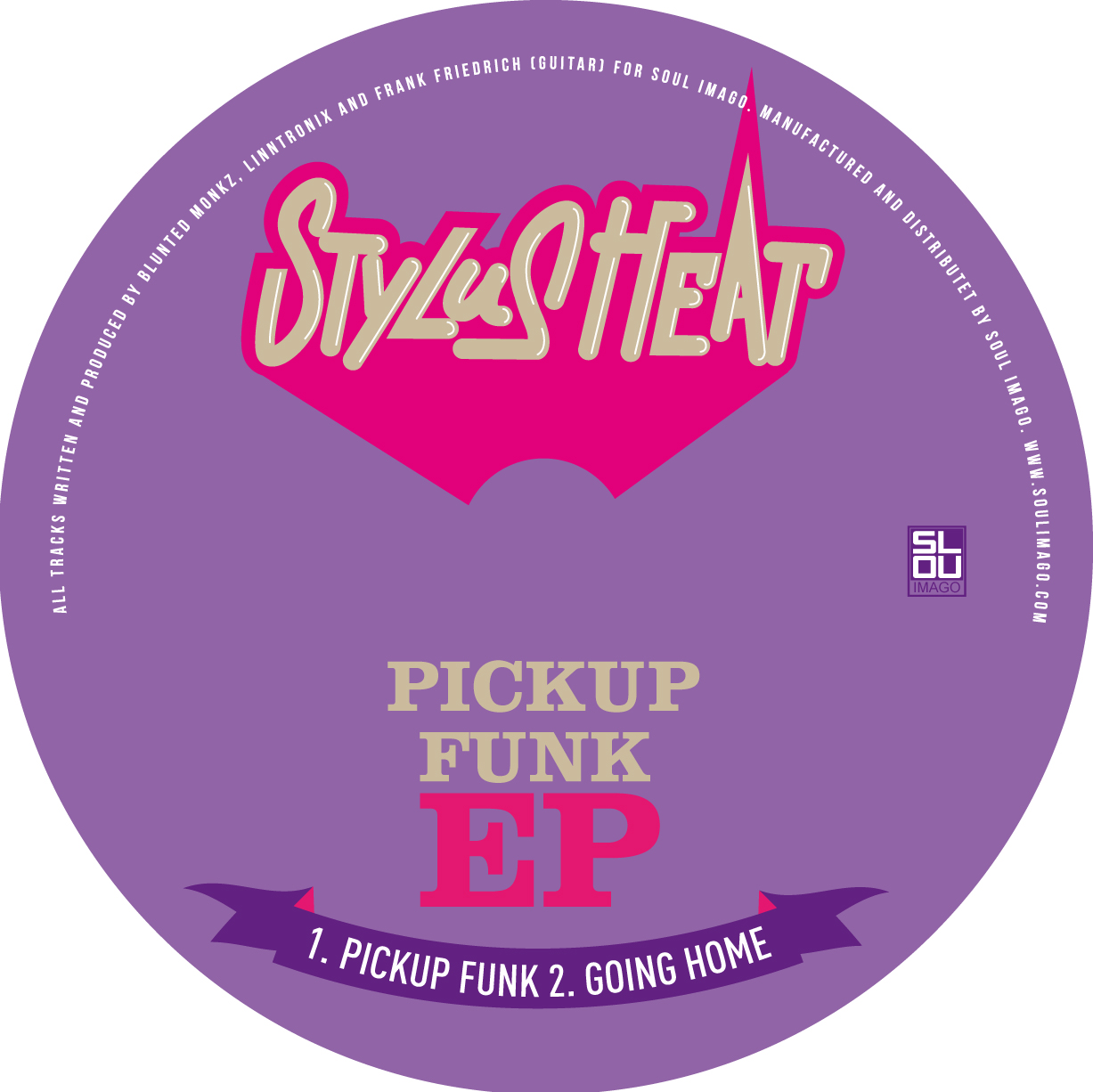 These 2 Stuttgart Germany funkateers Blunted Monkz (Danny Sugaman) and Linntronix (Philip König) accidentally met in Tübingen while Blunted Monkz was in on a gig. They instantly clicked and fast forward to now as they debut their new collaborative effort as Stylus Heat with 1203. 1203 is a disco affair all the way through with some hot guitar licks from Blunted Monkz father throughout. The record opens up with The Thing To Do a soulful disco jam with the keys, guitar,funky bass, crispy beat and grooving vocal samples all doing their job in the pocket and sure to keep the party moving into the deep AM hours. Next we hear Pickup Funk a minimal funk joint with a riding rhythm simple melody some exciting twists and turns at the break. These guys show their musicianship well on this song. This very dope EP closes out with a deep and soulful groove called Going Home. This deep house gem is dripping with soul, grooves and just a touch of moodiness in the vocals. Going Home is just what you wanna play at the end of a party right before the lights come back on. 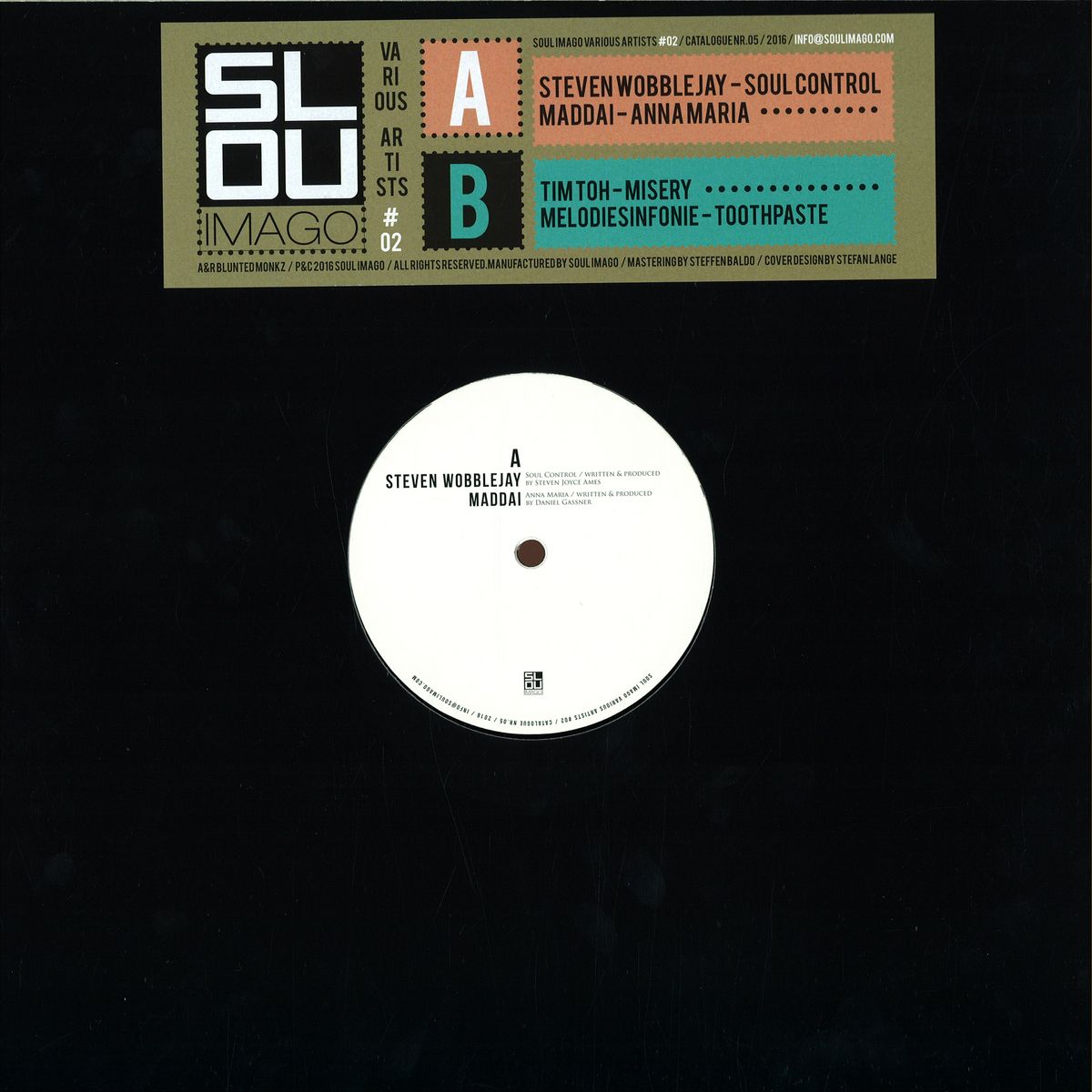 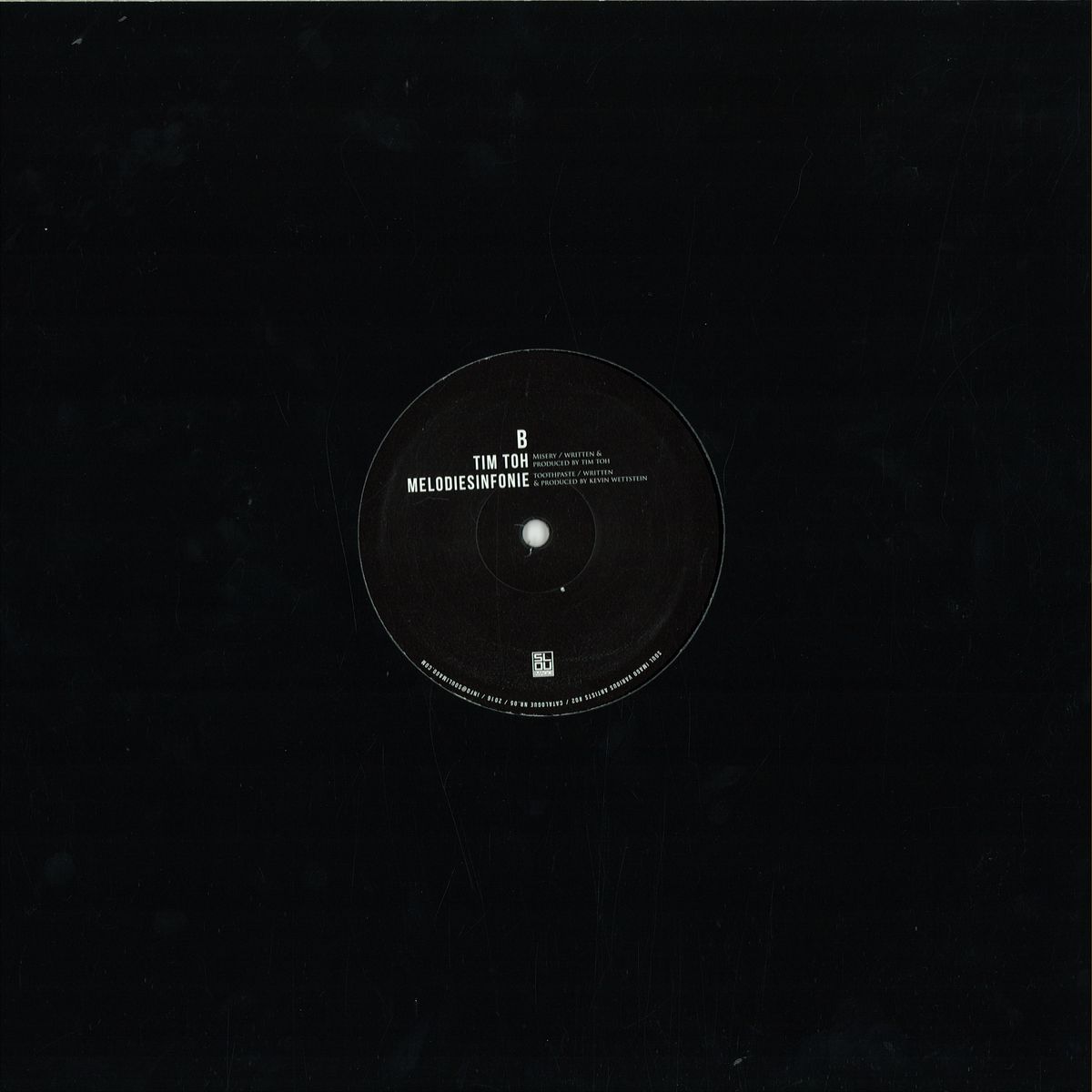 Soul Imago returns with the 2nd sampler from the German imprint and this one picks up where the last one left off with some nice basement grooves and nice experimental hip hop beats.
The sampler starts with „Soul Control“ a Detroit-esque house chugger from French producer Steven Wobblejay who’s already made remarkable records on labels such as Compost Records, Jazzmin Records, K7 and FACES.
He is also known for his work with Creative Swing Alliance with Pablo Valentino. The A side closes with a smoothed out hip hop joint with plenty of rhodes and swing from MadDai from Stuttgart Germany who outside
of producing beats is a multi audio talent also doing live beats showcases on his SP. The B-side starts off with „Misery“ from Stuttgart born Berlin based producer Tim Toh.
Misery is an off kilter house jammy with a light touch on the drums and a very abstract but also straightforward melody line. It’s a six minute jam that feels more like 3 as the sounds melt away the time.
This one will do well for fans of Theo Parrish and the more jazz oriented side of deep house music.
Just like the A side Soul Imago shows it’s not only a dance label but is all about the beats with a swingy chop heavy hip hop joint from Swiss producer Melodiesinfonie
called „toohpaste“. Toothpaste is a jazzy venture with recognizable acapella chops that set it off just right.
Melodiesinfonie is co-founder of Boyoom Connective and has worked with labels such as HHV, Box Aus Holz, Soulection and even for Soul Imago back in 2012.
All in all This second sampler is a testimony of what the label and it’s artists are all about. Good music and good vibes. 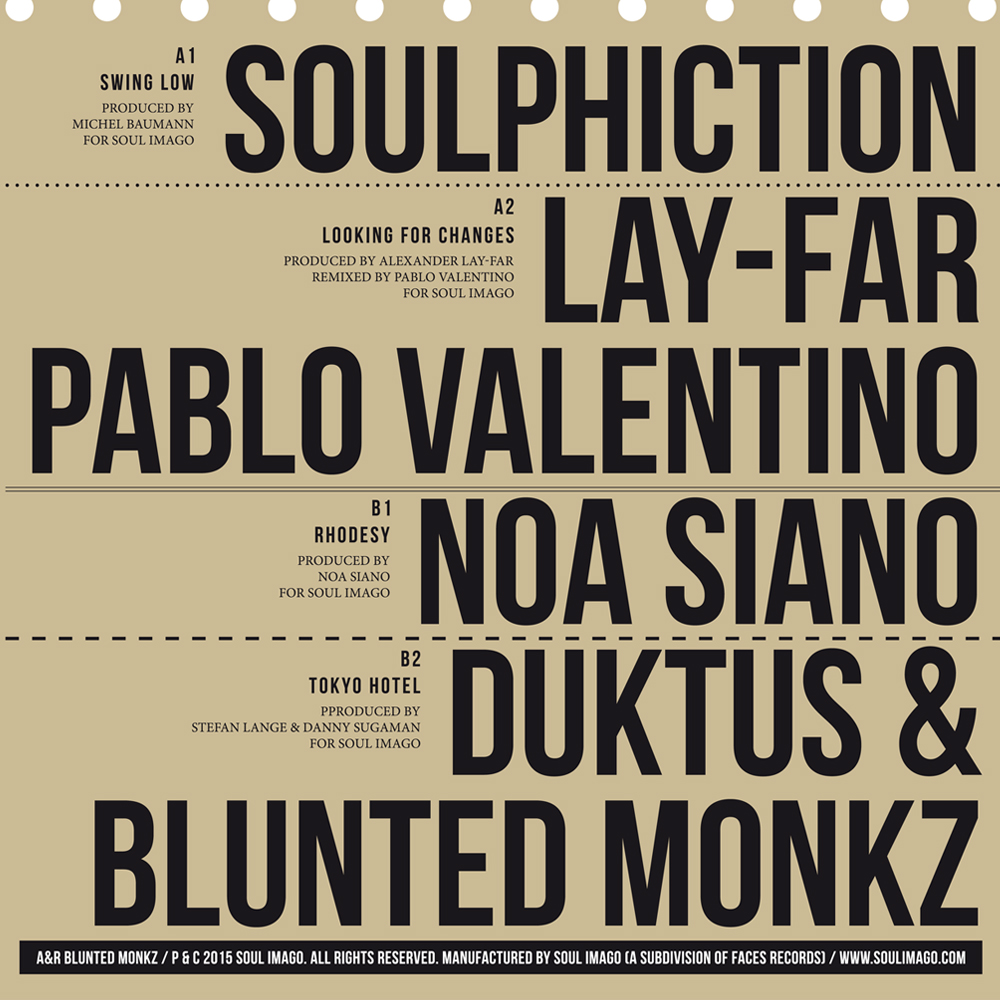 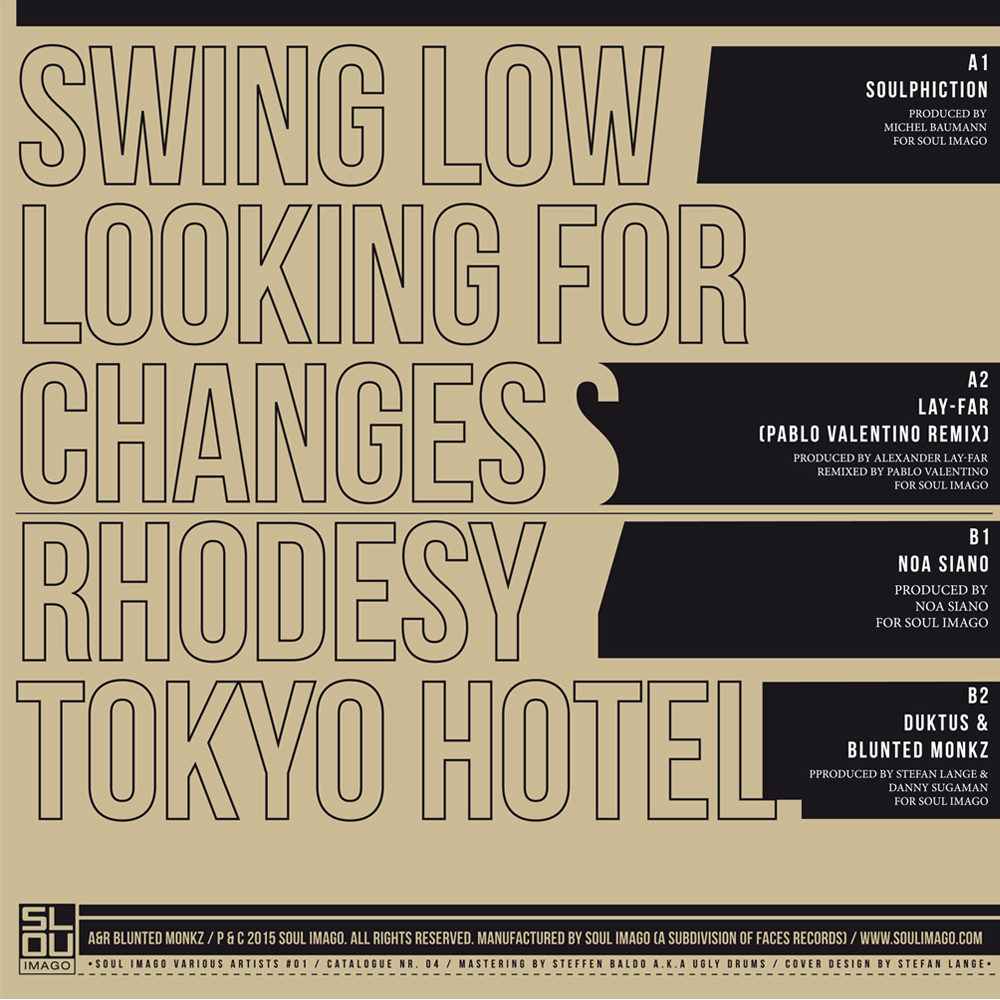 Soul Imago is finally back! After three successful releases as the Soul Imago Sampler, Lay-Far´s Detour Ep and the 15-tracks-compilation there has been a pause.
Now the label’s bosses Pablo Valentino and Blunted Monkz are back and present a fantastic 4-tracker on vinyl.
Soul Imago offers a perfect combination of tracks. Firstly, there is Soulphiction´s “Swing Low“: Minimalistic, crazy and perfectly animating – this record is a tight combination of its elements and offers loads of fun.
Secondly, Pablo Valentino’s “Looking for changes” Remix is deep and dirty from the beginning. The track takes on the EP’s atmosphere and is full of emotions due to the dope vocal samples.
Then, we immediately have Noa Siano´s “Rhodesy”. Everybody likes to dance to this track on the B side which constitutes the vinyl’s dynamic highlight. Last but not least, the talents Duktus and Blunted Monkz worked together.
Their “Tokyo Hotel” is kind of a mixture of jungle and big city and tells a story. Among other things, it’s a story of people making music that has not existed before. The rest of the story happens while listening.
This release is limited to 250 copies worldwide, enjoy ! 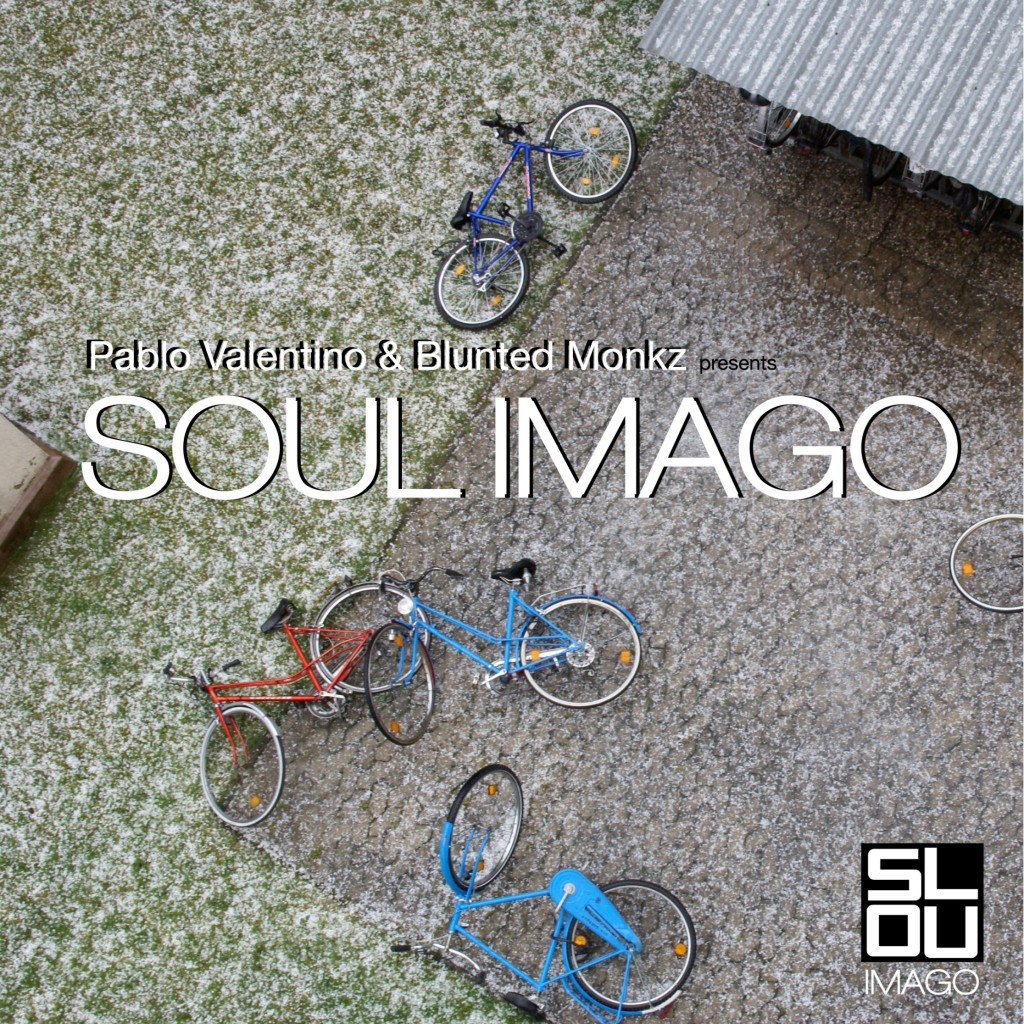 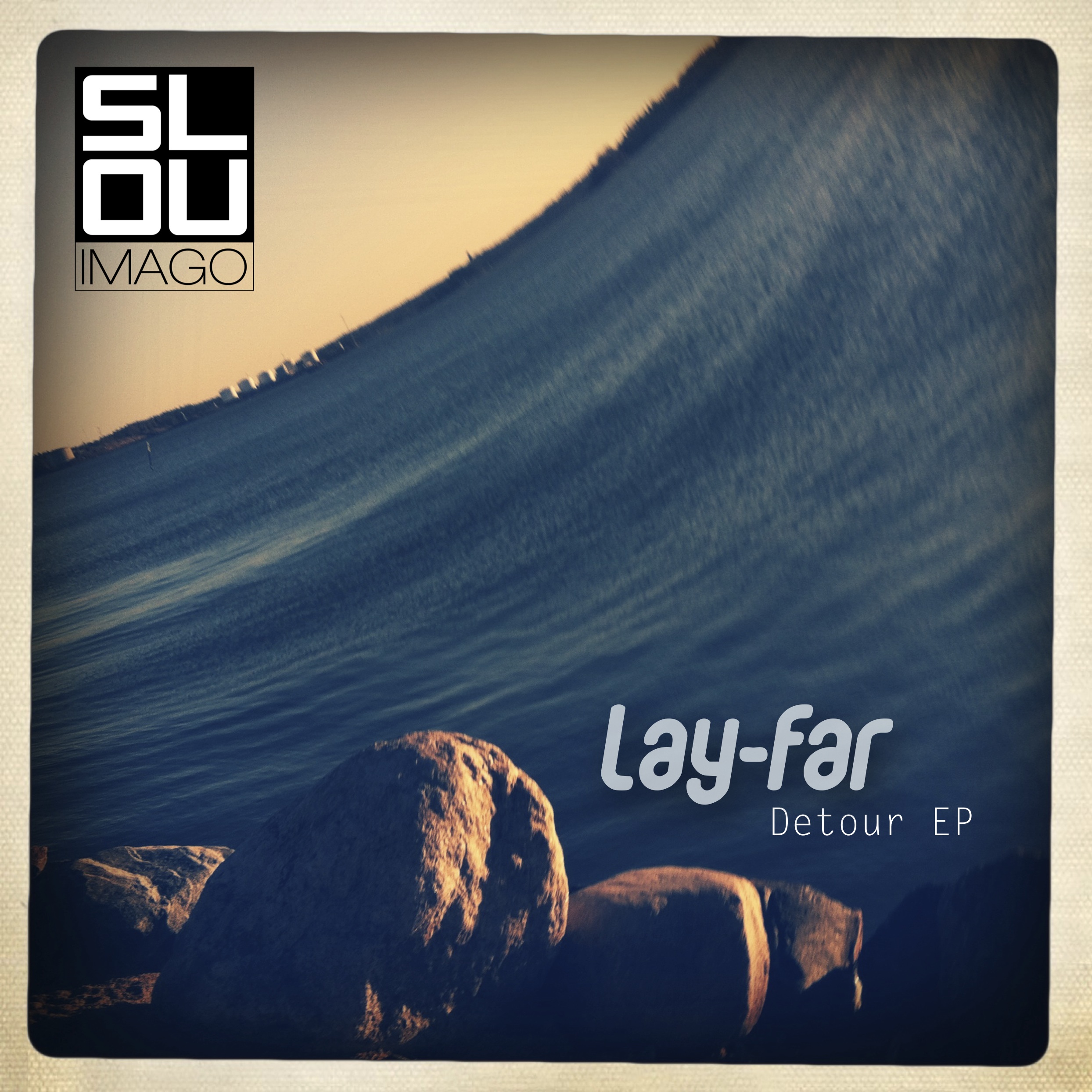 Soul Imago is proud to present its second release brought to you by the Moscow based producer Lay-Far.
In addition to his career as an eclectic Dj, Lay-Far shows his production talent with a passion from jammin‘ it out to deep, soulful & a slick perfection.
His last releases on Amplified, Development Music, Freestyle Records, Sonarpilot Audio & Shanti have been supported and charted by Joey Negro, Rainer Truby, Craig Smith, Move D, Alex Barck, Kiko Navarro, Red Rack’Em, Kev Beadle, Josh Wink, Gerd, Moonstarr among others…

TIP! For fans of 4hero (Dego), Jazzanova, Seiji…Check it out!

Alexander Lay-Far is an obsessed music lover, crate digger, dj and producer, based in the heart of Russia – Moscow.
He’s the author of well-acclaimed „In-Beat-Ween Sessions“ Podcast and a member of „Headz.Fm“ crew, which is responsible for some of the best underground music events in Moscow – within the last years they invited MCDE, Rainer Truby, Seiji, Dorian Concept, 6th Borough Project, Prommer and Barck, Africa Hitech, Dego (4hero), Jazzanova, Dj Krush, Gilles Peterson…to name a few and he plays regularly in Cult and Shanti clubs in Moscow.

Why called his first EP „Detour“ you would say?
First of all it’s an allusion to the poem by Robert Frost „The Road Not Taken“ and the idea it expresses: there are two ways – one – the easiest and the most common way, and another – a less traveled one, which he choosed and that’s the approach Lay-Far tries to implement in music production, dj’ing and life in general.

„Excellent package, not a bad mix to choose from, very hard to pick a favourite!“

Daz-I-Kue (Bugz In The Attic):

“I know most of the originals from ages ago as I am a big fan of Lay-Far – great to see these be made available to the public at last! I wil be supporting these on my radio show and at gigs.“

“Been a while since I last saw someone pick up where Goya left off once it closed, particularly with so much confidence and straight-forwardness. Lay-Far draws clearly on Detroit house to instrumentalize his snappy jazzy beat patterns and gets results close to those once achieved by Yotoko, Volcov, Jazzanova, and the likes.”

„Been following and supporting Lay-Far for a while now and he’s definitely got a unique vibe going on.“ 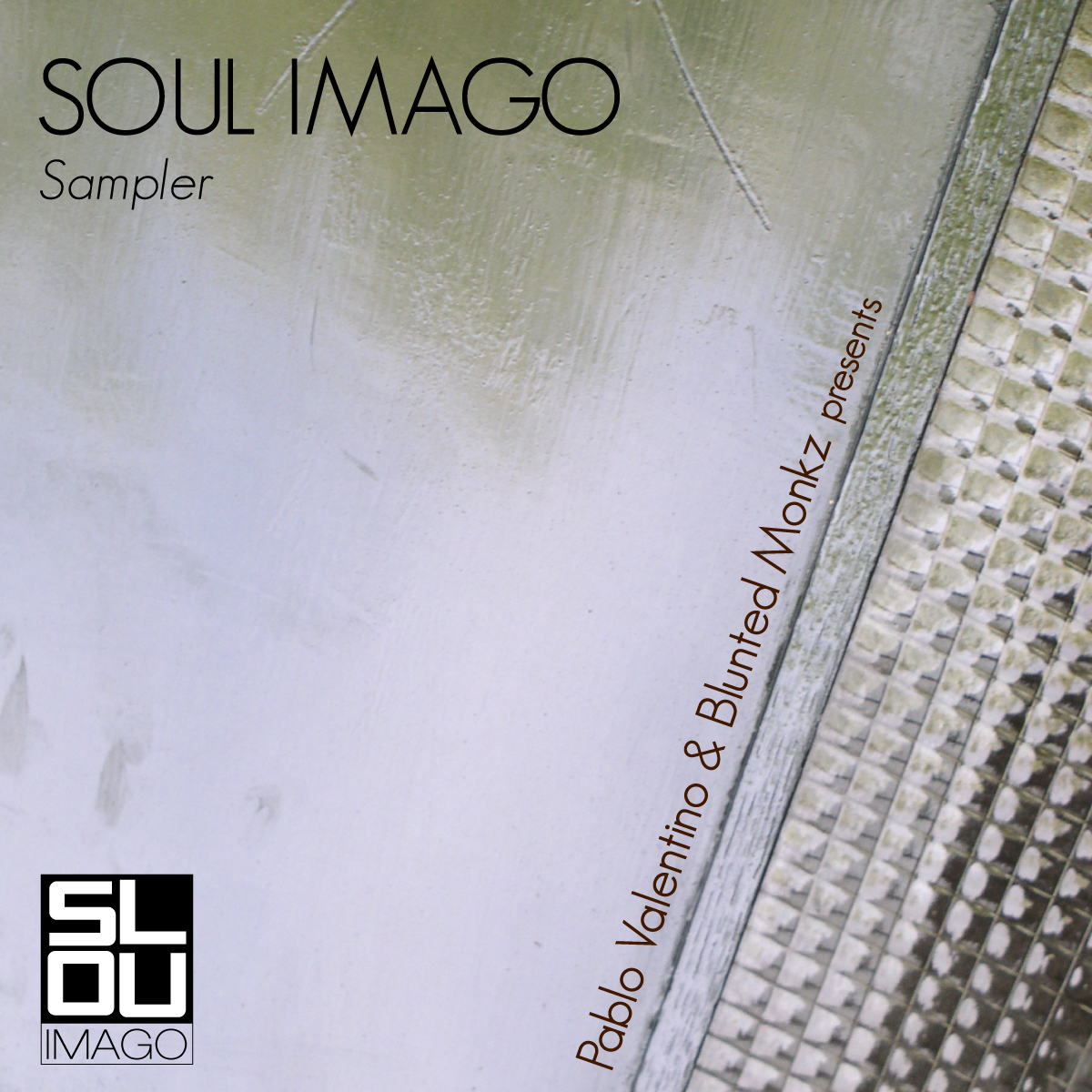 The first track on the Soul Imago Sampler is produced by the French duo „Creative Swing Alliance“, consisting of Pablo Velentino & Steven J. Both guys are located in the rustic town of Straßbourg, so for them its inevitable to doing music together! „Hot Future Summers“ is a very special song with spherical touch, slick arrangement and serious drums. Recently,they released a 12inch E.P on the Swiss label „Bonzzaj Recordings“. C.S.A in the houze!!!

French producer Gael Blondeau, a former member of Chamade Beat has worked with artists like Steve Spacek & King Britt and should`t missed on our Sampler.With dub-step oriented influences and crispy drums,he carried us with his track „Hangover“back to the dancefloor! Irie

Producer duo „Loki Laredo“ based in Singapore subjoin their track „all that“ to our Sampler.
Traversing between boogie, electro laden inspirations, hip hop, house and beats music, Loki represents all that is golden in the past fast forwarded into the future. All That is a testament to the Loki sound. Warm analog riffs, paired with a heavy soul influence, all bundled in a deep slow boogie ripper. Tasty!

Eric English is a producer based out of Wilmington(US).His influeces stem from hip hop and house.He developed a love for the genres as a child on summer vacations to NYC. Listening to stations like WBLS on late night radio. With his style he tries to blend the two genres. Higher Lerning is a direct result of those influences,he wanted to mix hard drums with spoken word but spoken word with a strong message like old school hip hop. So there you have it Higher Lerning…

Woizer, a Singer living in Den Bosch(Netherlands) chips in with his track“2074″.  The playful interaction between soulful voice, the undefined perfect tuned synthesizer chords and a rough bassline make it to a tour de „Space“! Intergalactic & futuristic sound experience! By the way this track is produced by the German producer „STEVO“!!!

Limyth, living in Prague, is a exceptional artist in doing Future Jazz & Broken Beats.Eclectica released his 3 track debut E.P in 2010.  When Limyth works on a track, he`s more defensively minded into finding harmonies and melodies than just „sound engeneering“. The track „Sound and Sane“ could be an example, a track with broken rhythmics and soul harmonies,it is structured as a song and gets more dynamic in the end.

some call it fresh, some call it far out, soopadope, advanced… nerds got many other terms…
but in fact things are more simple. this a young generation really taking control over their computers and equipment (not the other way round) and doing some heartfelt beats. the result is stunning! it is not about a certain style or sound it is a sublime attitude that adds the certain something, that most of the bedroom producers lack these days.
i predict a great future for these nuskool-soulbrothers!